“What A Relief” Podcast 57: The Real Impact of Charity 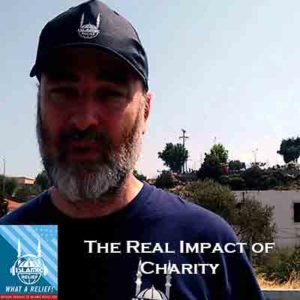 B.C. Dodge & R. Mordant Mahon talk to Imran Madden from Islamic Relief USA in this episode of “What a Relief!” — IRUSA’s official podcast.

This week, B.C. and Mordant chat with Imran Madden, the UK Director of Islamic Relief.

In the episode, he shares from his wealth of experience as an aid worker. When asked what he enjoys most, he says it is simply talking about the amazing work Islamic Relief does. He gets the most joy from conveying the true impact of donations based on what he has seen with his own two eyes.

And he has seen a lot.

Sights from remote parts of Africa, from tragic and conflict ridden parts of the Middle East, and from deep within the mountains of Pakistan. He describes to listeners how charity work is not always what it seems to the public. Like how two Christian aid workers, working for IRUSA in Kenya, were killed in the line of duty in conflict with so-called Muslim militia.

He also speaks about a new fundraising phenomenon among Muslim college students called Charity Week, a 100% volunteer led campaign of Islamic Relief in which Muslim Students’ Associations (MSAs) raise money for orphans and needy children for one week a year. He describes how motivating the youth are, and how even seasoned aid workers are not exactly sure why the program is so successful. In the end, they chalk it up to God’s blessings.

“It’s one of those wonderful examples in a very difficult climate,” he says. “We’re all nervous about the future and it’s great to see young Muslims confident and full of self-belief.”

“We’ve forgotten how to be positive.” he says.

Imran also has incredible stories about his time in the field and meeting people who, on paper, should be struggling on all levels. “If you and I were dropped into those circumstances, we would be struggling,” he says. But they were the happiest people on the planet. They were relaxed, they were wonderfully warm. They would share their food without even thinking. It’s just so instinctive and so kind.”

He describes seeing the impact of water projects in Africa on women and the chaos of disaster zones like Bosnia in 1995. Everywhere he went, he saw the deep levels of gratitude.

Tune in for your weekly dose of inspiration, and reignite your motivation to do good.