The following is an excerpt of an article posted by the Religion News Service | February 24, 2021

While Muslim volunteer organizations help anyone who needs it, their assistance was crucial to observant Muslims amid the food shortages of the crisis. 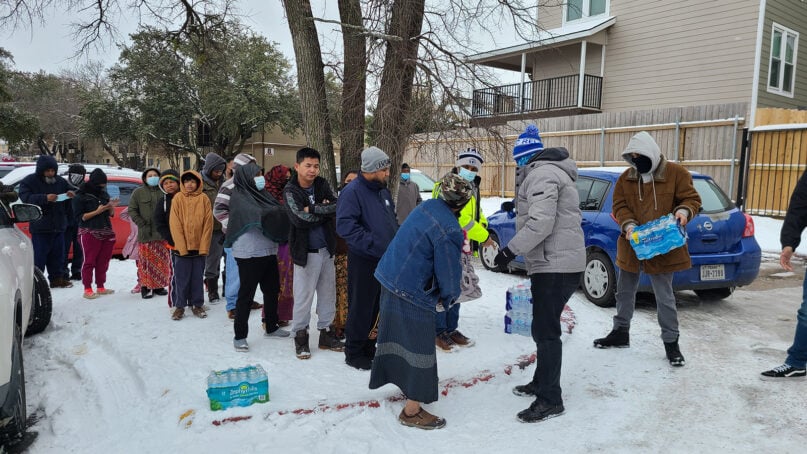 “DALLAS (RNS) — Aliyah Muzamil, a single mother of two, was without electricity for three days and nights during Texas’ deep freeze last week. One night the three of them slept in her car to keep warm. One day, they ran out of food.

“I left my kids with my neighbors and went to the masjid to grab hot meals they were giving out,” said Muzamil by phone on Friday (Feb. 19), using the Arabic word for mosque. “I assumed not many people would be out because of the extreme cold.”

When she got to the place where the Islamic Center of Irving was distributing food, she found “at least 150” cars in line, Muzamil said. “People need help. And I am not ashamed to admit that I needed help, too.”

The crush of need was similar at the East Plano Islamic Center, where volunteers had established a hotline for those who could not drive themselves. If the caller was within an hour or so of the mosque, volunteers ranging in age from 15 to 50 would deliver the meals themselves. Farther away, and the volunteers would find a local contact to order food from a nearby restaurant and have it delivered to them in that city.

In less than 30 hours, according to Imam Nadim Bashir, EPIC’s volunteers arranged more than 1,500 meals. 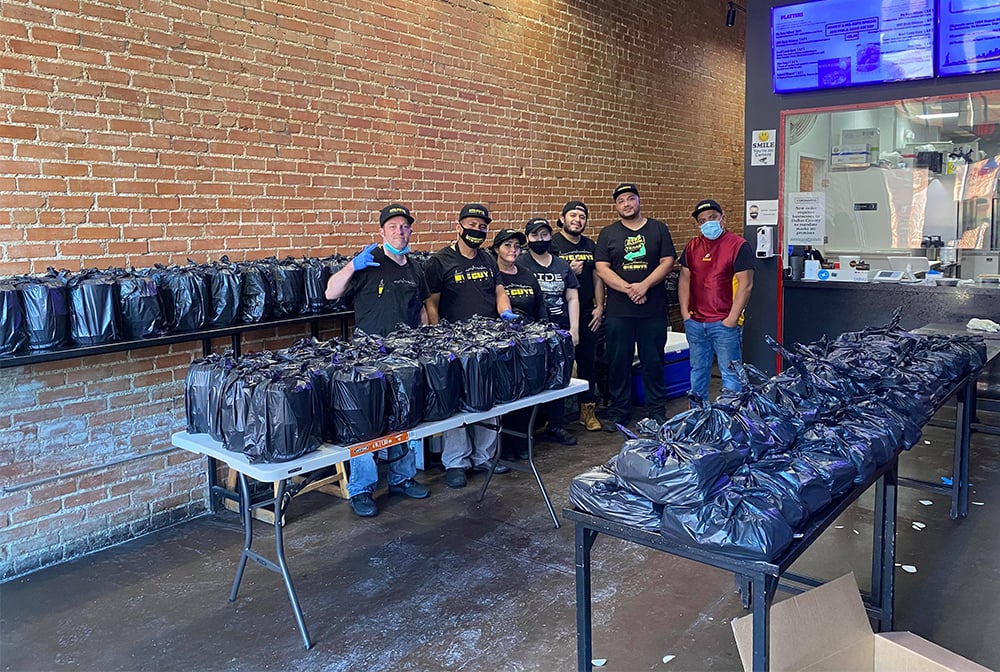 EPIC, like other Muslim organizations in Texas, has long volunteered in times of crisis, as national Muslim organizations such as Islamic Circle of North America Relief have done when major hurricanes hit. Last year at the beginning of the pandemic, EPIC volunteers organized a weekly food pantry. During Thanksgiving, the mosque’s volunteers drove to low-income areas and delivered 1,000 meals.

“We do this because Allah has told us that out of love for Allah, you help people,” said Bashir. “You cannot be a believer if you don’t love for your neighbor what you love for yourself.”

Several Muslim organizations including Islamic Circle of North America Relief and the Muslim American Society were among the groups helping out at Dallas’ Kay Bailey Hutchison Convention Center, which served as a warming station for anyone who needed it. They also coordinated with restaurants and other volunteers to provide more than 3,000 meals a day.

For some immigrant families, the deprivations of the freeze reminded them of what they had left behind. Shaimaa Eissa, a wedding and event photographer in Texas whose sister-in-law’s family emigrated from Pakistan, said in an email interview that she had received a notice from local authorities to boil water before drinking it, “— except there was no running water,” she added. “We found a faucet at a nearby park that was running, so we waited an hour in the cold to fill up a few five-gallon jugs we own in order to refill the toilets.”

Eissa said her brother and sister-in-law stood for two hours outside a grocery story, only to be told once inside that the store couldn’t sell them milk because the refrigerators had lost power.

“My sister in law joked and said ‘It feels like we’re back home all over again.’ Truly feels like a different world down here,” said Eissa. 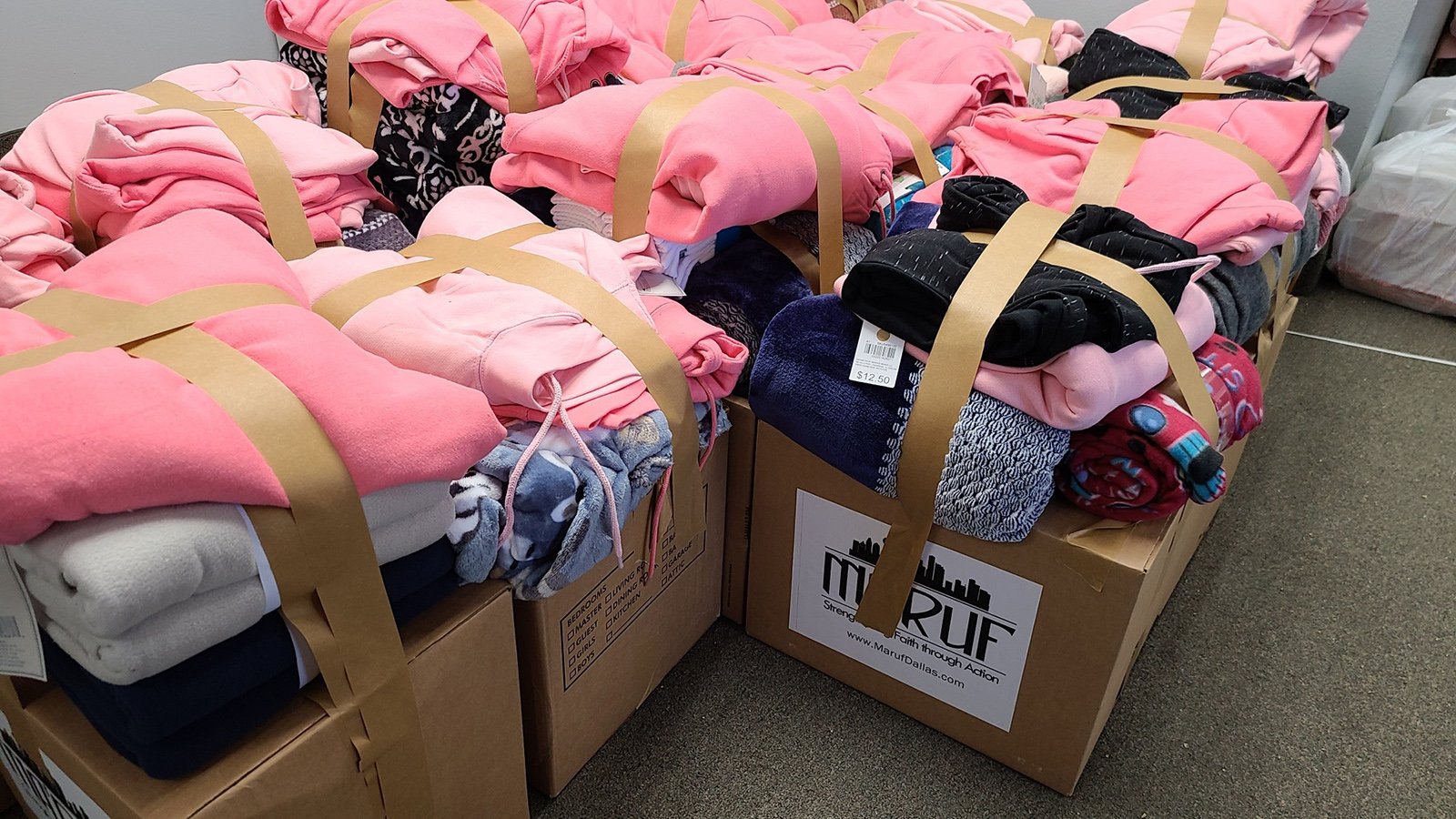 Cold weather relief packages that include blankets and warm clothing are compiled for distribution by Ma’ruf Dallas. Photo courtesy of Ma’ruf Dallas

Other newcomers require more assistance. Ma’ruf Dallas, a nonprofit organization that provides assistance to refugees in need, began assessing the impacts on vulnerable populations as soon as the storm hit. Working with volunteers and donors, the organization distributed more than 50,000 water bottles, hundreds of blankets, socks, and 1,000 hot meals.

“Our organization’s guiding principle is ‘strengthening faith through action,’ and that’s precisely what we aim to do every day,” said Fuad M. Dadabhoy, Ma’ruf Dallas’ executive director. “With our network of volunteers, we are able to respond to emergencies and times of crises quickly.” The organization planned to continue to provide meals and other necessities into this week.

While the volunteer organizations help anyone who needs it, their assistance is crucial to observant Muslims: One of Ma’ruf’s suppliers is Big Guys Chicken and Rice, a halal restaurant in Dallas. At the beginning of the COVID-19 pandemic, Big Guys started accepting donations for delivery to essential workers. Soon, working with Ma’ruf, the restaurant began providing meals for Syrian refugee families and people in underdeveloped areas of the city.

“Without Ma’ruf, we wouldn’t know where to find these communities or how to help,” said Anika Hossain Sheikh, who owns Big Guys with her husband, Saad Sheikh, who readily finished her sentences, as she did his. “Remember, the majority of them commute through public transportation. Ma’ruf was able to get literally trucks together to provide them with the essential necessities to hold them over.”

Silver Spoon Restaurant, which credits itself as the first halal restaurant in Dallas, has also been working to make thousands of meals. 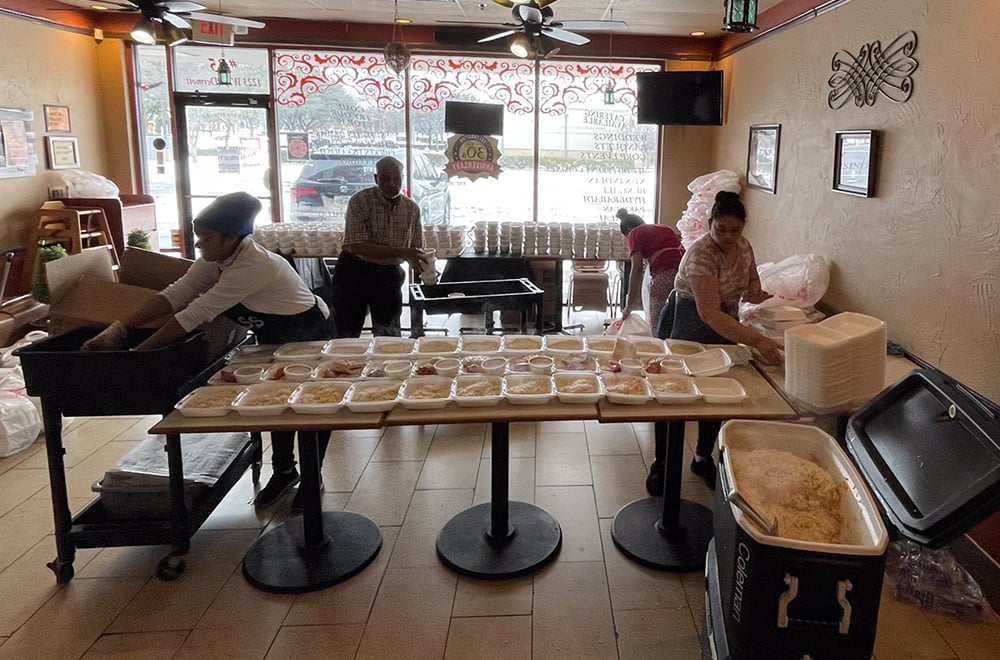 “We’ve been in that situation, coming from nothing to something,” said Ibaad Qazi, the restaurant’s managing partner. “If someone is in need, then don’t ask, just do whatever you can.”

Ali Ilyas, a 20-year-old man who lives in Dallas, is a local coordinator for Young Muslims, the largest Muslim youth organization in the nation, with over 50 local chapters from California to New York and five chapters in Dallas alone. The Texas volunteers, who range from their early teens to their mid-20s, showed up to do everything from shovel snow to help at warming centers.

For Ilyas, times like these remind him about the importance of lending a hand.

“It made me realize I hold a responsibility to my community. I know I’m going to be OK. I personally took that blessing and interpreted it as ‘OK, I’m all right. … Now I need to make sure I can do what I can to ensure that my neighbors are OK. That’s what my faith means to me.’” ”