The following is an excerpt from an article posted in The ManhattanTimesnews.com | Apr 18, 2021

It will distribute over 4,000 halal meals throughout Ramadan, which will be celebrated this year until May 12, as well as conduct outreach for food stamp benefits at partner sites in each borough.

Stringer announced “Iftar on the Go” at a press conference on Tues., Apr. 13th outside of Food Bank for New York City in Harlem, the program’s partner site in Manhattan.

“There is no excuse for a single person to go hungry in one of the wealthiest cities in the world,” Stringer said. “Every New Yorker, regardless of their zip code, language or faith, should have food to put on the table to feed their families.”

Stringer noted the lack of halal options in the city’s emergency food programs and said SNAP benefits were often difficult to connect with.

“The city’s efforts are not meeting Muslims where they are,” he remarked.

Stringer also asked that the city provide halal emergency food boxes during food insecurity and ramp up vaccine outreach for the Muslim community. 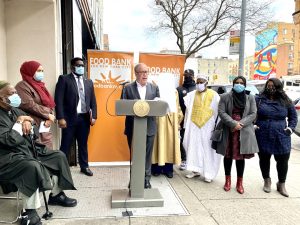 “Every New Yorker should have food to put on the table to feed their families,” said City Comptroller Scott Stringer.

He also renewed his call for the city to use $25 million in FEMA reimbursement to provide emergency food assistance to undocumented New Yorkers who are unable to access federally funded safety net programs like SNAP.

Imam Al-hajj Abdul-Rashid of the Mosque of Islamic Brotherhood, a Harlem religious group that descended from a mosque founded by Malcolm X, expressed gratitude to Stringer and encouraged Muslim congregations to “look for every opportunity” to partner with city leaders to fight food insecurity. 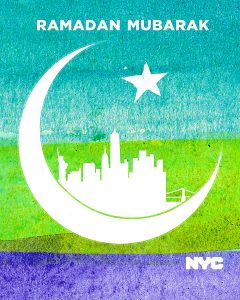 Food Bank for New York City will be distributing halal meals on Thursdays during Ramadan. Other partner sites include APNA Brooklyn Community Center, Islamic Leadership Council of NY in Queens, Bait-ul Jammat in Staten Island and SAPNA NYC in the Bronx.

Ramadan is a holy month for Muslims that focuses on prayer, reflection and testing between sunrise and sunset.

“After fasting today, no one should face an empty refrigerator after sundown,” said Brewer, who pointed out that an estimated 2.3 million people suffer from food insecurity in New York City.

“The intention of the [Ramadan] fast is devotion to God. But when you feel your body weak and undernourished and the great relief in breaking your fast, you cannot help but think of the New Yorkers who…experience this food insecurity not knowing where their next meal is coming from,” said Sultana Ocasio, Director of Food Bank for New York City’s Community Kitchen and Food Pantry.

The food bank provides halal meat at food pantry upon request year-round, Ocasio said, and has distributed more than 24,000 halal meals in the past year.

“Many of the communities that we serve feel undue shame in coming to emergency food programs,” said Ocasio. 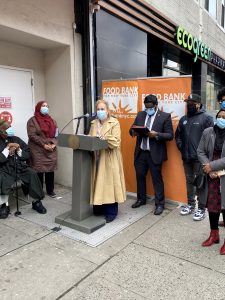 “No one should face an empty refrigerator after sundown,” said Manhattan Borough President Gale Brewer.

“It’s important that we instill trust as emergency food providers — that the meals we are providing are culturally competent; that if we say it’s halal, it’s halal, and that there is no shame in receiving food,” she added.

SAPNA NYC, a nonprofit that assists low-income South Asian women in the Bronx, opened an emergency food pantry during the pandemic.

“In the midst of a pandemic that has already resulted in so much fear, anxiety, and loss, being able to provide families with the food that they are used to eating is a small way of maintaining normalcy at a time when everything seems out of their control,” SAPNA NYC Executive Director Diya Basu-Sen said in a statement. ‘We’re grateful to be partnering with Comptroller Stringer and IRUSA this Ramadan to provide iftar meals to our communities in the Bronx so that families can focus on their spiritual reflection and prayer instead of worrying about their next meal. These iftar food distributions will also allow us to do outreach on SNAP enrollment, COVID vaccines, and other community needs that will help ensure a more equitable recovery for our city.’ ”