Huffingtonpost.co.uk: “I Live In Beirut. Our City Is On Its Knees, But We Will Not Buckle”


The following is an excerpt from an article on the Huffingtonpost.co.uk published Aug, 2020.

We immediately went to a safe spot inside the flat, away from the windows. My daughter couldn’t stop crying, traumatised and unable to understand what had happened, but we composed ourselves and after a few minutes, when it seemed like things may have calmed down, I ventured back out to assess the damage. Everything was shattered: smashed balcony doors and windows left broken glass everywhere. I got my daughter some water, got my wife to wash her face and then started clearing some of the glass shrapnels from the floor.

The port explosion has been breaking news across the world, but to us Lebanese people, it is just one more tragedy in what has been an unbearable few years.

Our country has been plunging deeper into an economic crisis that is now the worst it has seen since independence in 1943. Last October, thousands took to the streets to protest the economic situation. At Islamic Relief, where I work as Lebanon country director, we were forced to change our strategy from working on longer-term programmes to focus more on people’s immediate needs – mostly emergency food parcels. And when the coronavirus pandemic brought not only health woes but further economic stagnation due to lockdown, things only got worse. Cases have spiked in recent weeks. 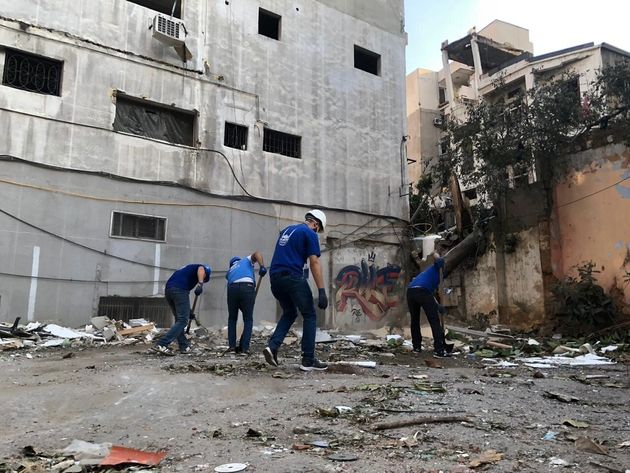 This crisis has dragged nearly half the population – many of whom are Syrian and Palestinian refugees – below the poverty line, and has caused the unemployment rate to soar to 35%. With the country defaulting on debt for the first time earlier this year, now even middle class families have been fighting to put food on the table. For nearly a year, all people have been concerned with is ‘how am I going to eat tomorrow?’

The explosion of 2,750 tonnes of ammonium nitrate at the Port of Beirut has caused a humanitarian catastrophe, with at least 100 dead, at least 100 missing and at least 4,000 injured. An entire hospital was destroyed, and those remaining are already on their knees due to the pandemic. But if these immediate impacts aren’t bad enough, the disaster will only restrict food even further to a country whose people are already starving.

We are used to adversity. So however unfathomable this challenge, we will come together to fight it.

Some 80% of Lebanon’s food stocks come through Beirut’s port, and it has all been completely devastated. The blast demolished a vast storage unit that was holding the majority of the country’s grain.

A large proportion of Lebanon’s population are refugees, and there have been social tensions building for years, exacerbated by the economic crisis. We are concerned that these tensions will bubble over and explode.

In the midst of this catastrophe, Lebanese people are resilient. We are used to adversity. So however unfathomable this challenge, we will come together to fight it.

Our staff at Islamic Relief, who thank goodness are safe, will be providing drinking water and food for people who have lost their homes. In a few days, we will also start helping to clear the streets of the debris caused by the blast, providing people currently out of work with cash to help out. Longer-term we will need to continue providing food parcels, in the hope that this country that has been on its knees for a long time now does not finally buckle.