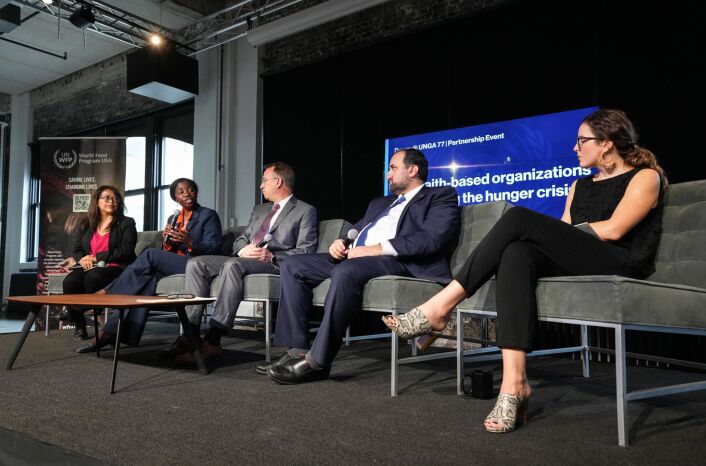 Lheslye Pérez Santis with Catholic Relief Services, left, Rudo Kayombo with Food for the Hungry, Robert Hokanson with The Church of Jesus Christ of Latter-day Saints, Anwar Khan with Islamic Relief USA, and Teresa Welsh with Devex discus faith-based organizations’ role in combating hunger worldwide in New York City, on Sept. 22, 2022. It was in connection with the in connection with the 77th session of the U.N. General Assembly. | Provided by Devex

“As the world faces an unprecedented hunger crisis, faith-based organizations — including The Church of Jesus Christ of Latter-day Saints — play a key role in responding to the ongoing crisis, but also to help build resilience in communities.

And faith-based organizations are doing that through collaboration, explained Robert Hokanson, senior manager of global priorities and special projects for the Church of Jesus Christ.

“Many people would be surprised at the level to which faith-based organizations interact, roll up our sleeves, lock arms and go to work together,” he said at a recent Devex panel discussion in New York City in connection with the 77th session of the U.N. General Assembly.

The Church recently gave an historic $32 million dollar donation to the World Food Programme. The World Food Program USA president and CEO, Barron Segar, said when he started as CEO in 2020, he was overwhelmed by the support coming from faith-based organizations — no  matter what faith.

“I’ve learned that faith-based partners inspire a connection with community,” Segar said. “They believe the world is one place and to love thy neighbor as thyself.”

He said donations are making a difference with men, women and children in countries around the world. But besides the money, he also sees faith-based organizations when he goes into the field.

“They are not only funders, they are on the ground. They play a significant role in the alleviation of hunger,” he said.

Anwar Khan, the president and co-founder of Islamic Relief USA, said these interfaith relationships are long standing and long lasting.

“You are not hearing these stories,” Khan said.

Hokanson followed up on that, saying there’s an all too common misperception that faith-based organizations somehow are in competition. “In fact I think everyone here would agree our experience is just the opposite,” he said.

The organizations recognize where their strengths lie, and where they need to rely on someone else — the differences in faith don’t divide the organizations, they bring them together.

“One of the things implicit in a faith community is trust. Individuals will donate to their church because there’s a trust there. That is borne out when we can show them that we can overcome difference, and we can work together,” Hokanson said

A representative from the Adventist Development and Relief Agency in the audience spoke about the donations the Church has made to that organization, and how the collaboration has allowed the agency to go into communities and foster more partnerships with local leaders.

Hokanson said faith-based organizations have the ability to marshal resources — not just financial resources and cash donations, which are important, but the power of people who adhere to their faith. And that’s where the real power is, in mobilizing people to serve and bless the lives of others.

“They have the opportunity to look around them and connect and engage in the local community wherever that is,” he said. ‘We can watch for others who are at risk and in need, and then we are in a position where we can take action.’”