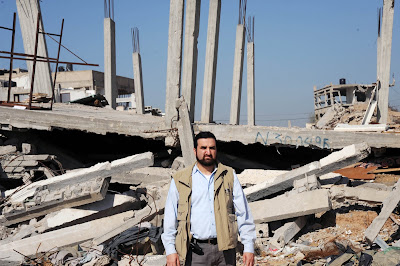 Senior U.S. staff member Anwar Khan wrapped up his visit to Gaza earlier this week. He was visiting Islamic Relief projects and met with many beneficiaries who shared their stories and feelings with him.

In his latest diary entry, he described his last day in Gaza and trip back to Islamic Relief Worldwide’s headquarters in Birmingham, U.K.. Khan’s parting moments with Gaza proved memorable. You will find some of his reflections below.

November 8 – My last day in the office was frantic as last minute preparations were being made. Normally a team of 3-4 members from the U.S. would conduct audits, evaluations, prepare media material, meet staff and beneficiaries. I had to do as much as I could with a limited staff because it is difficult to send humanitarian aid into Gaza.

I was told Ihad to get to the border by noon to make it smoothly across the border. I then had to wait nine hours at the border. It would be another five hours to Cairo by car. As I was waiting at the border, I was asked if I thought we would make it across. I had no doubt. The people of Gaza are the ones under siege. For most of them, being delayed is not the problem; it is entering, or leaving.

This year, the hajj pilgrims have been allowed to go on pilgrimage and that added to the rush.

November 9 – I arrived in Cairo at 2:30 a.m. only to leave for the airport three hours later. The journey from Gaza to the Islamic Relief Worldwide headquarters in Birmingham, U.K. would take nearly 30 hours and I still have meetings in the U.K. before I will return home to Dallas, TX.

This was an emotionally draining trip but it inspired me. It was difficult to hold back the tears when hearing of the human tragedy. But it was inspiring to see their resolve in face of adversity. Fathers buried their sons and then went straight back to helping others who were still alive; widows had to look after one son with multiple sclerosis, another with cancer and choose between medicine and food.

I remember a surreal moment when I was invited for a late lunch in a hotel restaurant by a local philanthropist. We were on the tenth floor overlooking the Mediterranean Sea at sunset.

This would have been a very romantic location, had it not been for the gunfire from the Israeli navy firing warning shots near Palestinian fishermen to keep them within 3 km of land.

As with the other occasions I heard gunfire on this trip. Nobody flinched. This is part of the Gaza routine.

Sign up for an Islamic Relief USA account to receive our latest updates and our monthly e-newsletter.